At Bristol Rovers on 23rd April

At Bristol Rovers on 23rd April

Travelling to the game

The postcode for sat navs is BS7 0AQ.  There isn’t any available parking at the stadium itself, though there is street parking all around if you are happy to have a little walk.

Filton Abbeywood or Momtpelier are the nearest stations (1 1/2 miles away) but there may be better connections to Bristol Parkway – Parkway is a couple of miles from the ground.

Don’t forget the match is a double-header, with FGR Women kicking off at 18.45 in an exhibition game against Bristol Rovers Women’s FC.  Two games in one!! 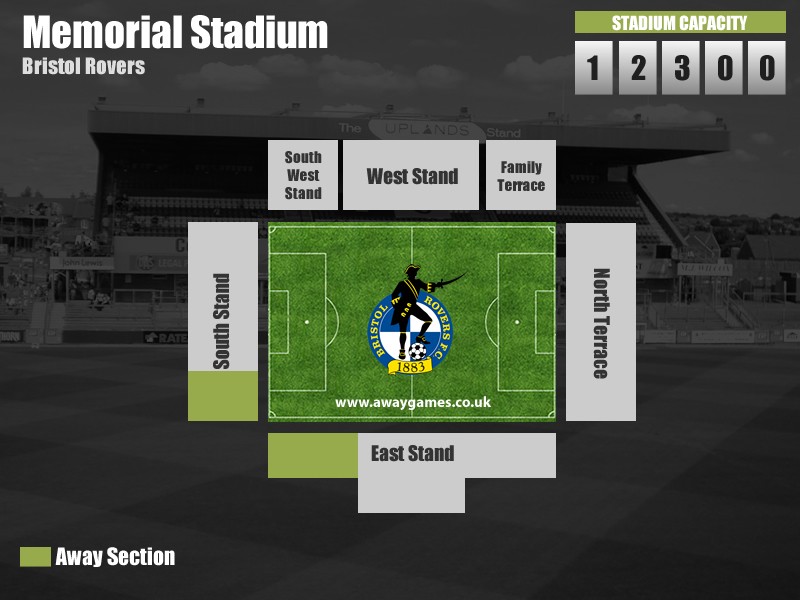 Bristol Rovers have played at the Memorial Stadium since 1996, having previously played at a number of stadiums including the Eastville Stadium and Twerton Park. The Memorial Stadium dates from 1921, dedicated to the memory of local Rugby Union players killed during the First World War.

The stadium is a weird mixture of stands.  The West Stand looks high and a bit incongruous as it towers over all the other stands. The Blackthorn End is a small covered terrace behind one goal, while the East Stand is a combination of both covered seating, terracing, and an open terrace either side.  Away fans are usually in the East Stand, in an area open to the elements, so you might get wet if it rains, plus it is difficult for away fans to really generate some noise from this area.  Up to 1,100 away supporters can be accommodated on this terrace.  If the weather is poor then it may be a better bet to head for one of the seats that are made available to away fans in the Brunel Group (South) Stand at one end of the ground.  Although the stand is of the temporary variety it is covered, although it does have a number of supporting pillars running across the front of it that may get in the way a bit.

Just the 2nd EFL meeting between Bristol & Forest Green.  FGR will be hoping to do the double over the Gas after a 2-0 victory in Nailsworth where Jamille Matt’s double and a Dokes sending off were the key incidents.

Bristol have a big squad at their disposal (34 in the squad, compared with FGR’s squad of 19).

Bristol started the season disappointingly, losing 7 of their first 14 games.  However, they have rallied very well – over the last 8 games they are the in-form side in the division.  They haven’t been defeated at home since a 2-1 reverse against Port Vale on the 7th of December.  Their record is now 21 wins, 10 draws, 12 defeats and they are in 5th place in the table, firmly in play-off contention, and with a firm eye on automatic promotion.  Last time out they travelled to 3rd place Port Vale and came from behind to win 3-1.

They are 9 points behind Rovers (having played one game more).  They are one of three sides who could possibly deny FGR automatic promotion, but Rovers have a goal difference of +34 while Bristol are +14, so it would take a huge swing in goals for them to overhaul us.

Attacking midfielder Antony Evans (number 21) has 8 goals to his name so far and is Bristol’s 2nd top scorer.

Other than these Bristol’s main players to watch include, Brett Pitman (number 40), Sam Nicholson (number 11) & Luke Thomas (number 7), the veteran Irish international Glen Whelan (number 26) may make an appearance.  Now 37, Whelan joined in September as a free agent.  He has 91 Irish caps in his locker and brings experience to the defensive midfield.  Tall striker Ryan Loft (number 38) joined from Scunthorpe in the January window and scored his first goal in 11 appearances last time out against Port Vale.

The Gas lined up as a 4-2-3-1 in their last 2 games (against Salford at home and Port Vale away), with Aaron Collins leading the line on both occasions.

Aaron Collins who opted to move to Bristol in the summer.

Bristol appointed Joey Barton as manager in February 2021.  This followed him leaving ‘with immediate effect’ his previous (and only other) managerial position at Fleetwood Town.  In his first half season Rovers were relegated back to League 2.

Barton’s career has not been short of incident, so his appointment at Rovers may have been seen as brave.  These are some of his incidents –

The Bristol Rovers manager is no stranger to controversy.

Bristol Rovers are officially nicknamed the Pirates.  But they are unofficially better known as ‘The Gas’, and their supporters as ‘Gasheads’.  Eastville stadium (now an IKEA and Tesco next to the M32) was Rovers home for over 90 years until 1986.  Eastville was situated next to a gasworks which produced the smell of old gas fumes.  It was said that when the heads of the gasometers were rising, the smell helped to overcome the opposition – hence Gasheads!

The classic Bristol Rovers anthem is ‘Goodnight, Irene’, which Gas fans have been singing for about 70 years.

The song is a Lead Belly song from the early 20th century, since recorded by a number of different artists.  Quite how it became the Bristol Rovers anthem isn’t entirely clear.