Rovers at Swindon on 26th April

Rovers at Swindon on 26th April

With home gates ranking the 2nd highest in League 2 (averaging about 9,000), we can probably expect a busy County Ground for the visit of a local rival.

On match days home and away fans can park on the cricket ground (for £5) and then have access to a drink in the cricket club (same Sat Nav postcode as the ground – SN1 2ED).  This is apparently a very friendly (as well as cheap) club that always welcomes away fans.  You’re welcome to a beer here even if you don’t use their parking.  At the ground, away fans have their own bar, called Bar 71, which is near the away turnstiles. 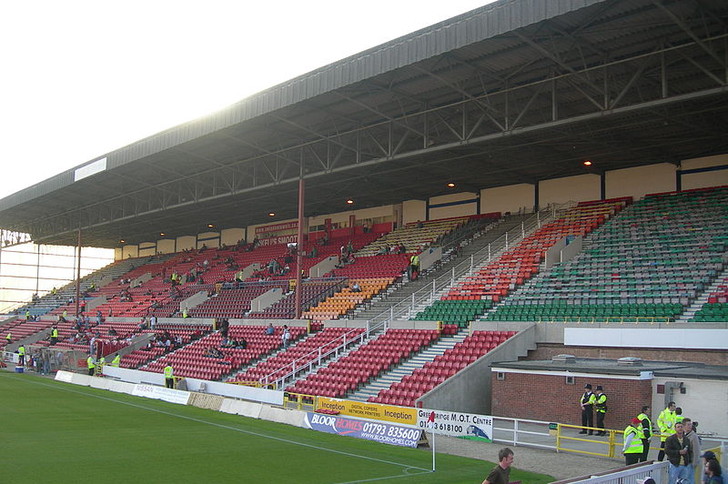 The Arkells Stand – away supporters are housed in the blocks at the far right of the picture.

Away fans are located in the Arkells Stand at one side of the pitch, where up to 1,200 fans can be housed. This is an older stand (with facilities to match) but you are under cover.  At the back of this stand there is one supporting pillar which might impede your view of the goal but, otherwise, the view is good.  The stadium has a capacity of just over 15,700, but the Stratton Stand behind one of the goals isn’t usually used.

Ticket prices are below.  Tickets through FGR or on the day (they can’t be bought online).

Swindon were well in the hunt for a play-off or automatic promotion place, but recently started to stumble at a crucial stage of the season.  This coincided with an injury to their talismanic striker Harry McKirdy, who hadn’t played since March, and the early recall of Tyreece Simpson, on loan from Ipswich, who had scored 9 goals for the Robins during his stay.

With 3 losses, 1 draw and 2 wins in their last 6 outings, Swindon dropped to 9th in the table.  But a good 3-0 away win at Hartlepool last time out, the return of McKirdy (who scored twice on his return) mean that Swindon fans will be expecting a play-off place, albeit they are 2 points behind Sutton and 4 behind Mansfield in that race.  Automatic promotion is still mathematically, but not realistically, possible.

Swindon and FGR have the best away records in the league and the 2 teams have scored more goals than any other sides in the division.  But Swindon’s home form has been something of an Achilles heel – just 28 points from 21 home games compared with 40 from 22 away fixtures.  Their last home game was a 2-1 loss to Leyton Orient, this despite playing against 10 men for most of the game.

When the 2 sides met at TFCNL in early October, Swindon won 2-0 with 2nd half goals from Harry McKirdy and Tyreece Simpson. 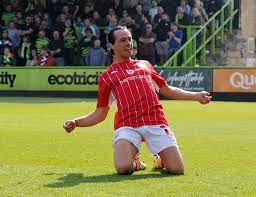 Harry McKirdy (number 11) is having his best goalscoring season (by some margin) in his 1st season at Swindon.  He is Swindon’s top scorer with 17 goals.

He is a versatile attacker, able to play in any forward position, either centrally or out wide.  Crewe boss David Artell called McKirdy “a natural goalscorer” and “one of those nuisance forwards, who gets under the feet of centre-halves”.  McKirdy has been out with injury recently.  It was initially thought the injury was season-ending but he returned with 2 goals in Swindon’s last game.

McKirdy has been criticised for his temperament, particularly in regards to his reactions to jeering by fans both on the pitch and on social media.  After picking up his 10th yellow card of the season (earning him a 2 match suspension) he took to Instagram.  This resulted in him being fined £1,000 for improper and insulting comments that brought the game into disrepute.

9 of Swindon’s goals came from their 19 year-old Ipswich loanee, Tyreece Simpson, who was their 2nd top scorer before Ipswich recalled him early from his loan spell.

Swindon forward Josh Davison will be remembered by Rovers fans.  Josh was on loan to us last season from Charlton (making 20 appearances and scoring 3 times).  He went on loan to Swindon in January.  Josh has made 14 appearances for the Robins and has scored 8 times, including 3 in Swindon’s last 3 games.

Swindon’s manager, Ben Garner, was appointed 17 days before the start of the season, at a time when Town only had 8 contracted players.  The Swindon view was that Garner improved Swindon’s defensive play with a decent partnership at the back between captain Dion Conroy and Romoney Crichlow.  But Crichlow was recalled from his loan from Huddersfield, then was immediately loaned to Plymouth.

Some feel that Garner can be a little conservative in his set-ups and Swindon are likely to be set up as either 4-2-3-1 or 3-4-2-1.  However, they were a more adventurous 5-3-2 formation in their outing against Bristol Rovers, and set up as a 4-3-3 in their last home game against Leyton Orient.

Swindon fans view their better players as Louis Reed and Jack Payne in midfield, and Jojo Wollacott in goal  – all of whom tend to go about their business quietly.

Swindon have played in all 4 of the top leagues. They were a Premiership side in 1994 (briefly!) but by 2006 they had become the first former Premiership side to be relegated to the lowest football league division.  Since 1921 Swindon have spent most of their time in the 3rd tier of the EFL.  The period between 1987 and 2000 was their peak, when they were in the 2nd tier apart from that one season in the Premiership.   Swindon have been in the 4th tier on 4 occasions, but their visits to this level have tended to be brief (twice promoted straight back up to the 3rd tier).  They won promotion in 2020 as champions of League 2, only to be relegated again after just one season.

Swindon’s nickname, The Robins (supposedly because of their ‘redbreasted’ kit) is also the nickname of Cheltenham Town and Bristol City.

Probably Swindon’s most famous son on the pitch was their outside left, Don Rogers.  Rogers scored the 2 extra time goals that won Swindon the 1969 Football League Cup against Arsenal.  One of the stands at The County Ground was named The Don Rogers Stand in 2008.

Traditionally Swindon fans have considered their main rivals to be Oxford Utd (a feeling reciprocated by Oxford fans).  But these days it is Bristol Rovers and Forest Green that are likely to be the more immediate rivalries.

In 1951 Swindon became the first club in the league to install floodlights at their ground (at a cost of £350!).

Swindon itself is famous as a railway town (The GWR railway museum is worth the visit, next to the Outlet Mall).

But many associate Swindon with another feature that sits right next to the County Ground.  The Magic Roundabout was constructed in 1972 and has confused locals (and especially American tourists) ever since!

The Magic Roundabout shortly after its opening with the County Ground behind.