Rovers make the journey to Essex to play Colchester on Monday 21st March.  It’s a 19.45 kick off.

The postcode of the stadium is CO4 5UP, but you may find that your sat nav system doesn’t recognise this postcode, so try CO4 5JS, which is the nearby Rapid Electronics factory.  There are 700 car parking spaces at the stadium which cost from £6 to £10.  You can pre-book your car parking space in advance via the Colchester United website  If this car-park sells out, the club direct fans to an overspill car park located on the nearby industrial estate (about a 10-15 minute walk away from the stadium) which costs £8.  There is also an extensive residents only parking scheme in operation around the stadium, so you may need to be over a mile away before you can find a free street parking space. 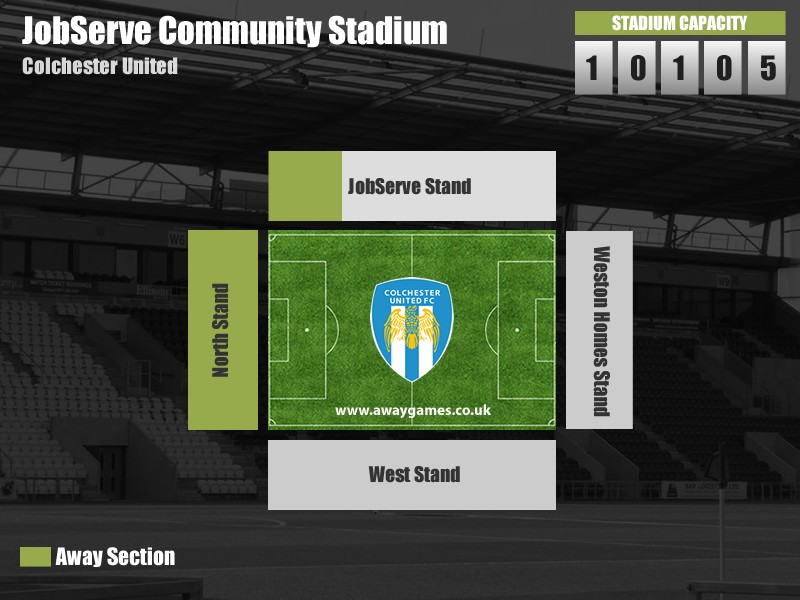 Away fans will be in part of the North Stand behind one of the goals for this game.

Colchester say that all match tickets will be just £10 per person for the game (regardless of your age).  It looks as though you will be able to book away tickets online through the Colchester website.  The club say that all proceeds from gate receipts (without any deductions) will be used to help with raising funds to help the humanitarian crisis in Ukraine.  A fantastic gesture, Colchester!

The U’s season so far

Colchester are in 20th place in League 2, but they pulled 8 points clear of the relegation places when they travelled to Scunthorpe and won 3-1.  Their goals scored (36), goals conceded (51), and their home and away form, are almost identical to their league position.

But this doesn’t mean the U’s should be underestimated.  They have defeated Exeter, Port Vale, Salford & Harrogate this season.  This month Colchester won 2 consecutive games for the first time this season (against Port Vale & Scunthorpe).  A draw against Leyton Orient and a narrow loss at Bristol Rovers last time out suggest that Colchester are starting to look much more resilient.

The reverse fixture was as recent as the 11th of January.  In a tight game, Jamille Matt scored in the 15th minute before a 90th minute Jake Young goal secured the 2-0 victory for Rovers.

Sears was at West Ham for the first 5 seasons of his professional career but never really found his scoring touch.  He moved to Colchester in 2011 when they were in League 1,scoring 36 goals in 109 appearances.  He then moved up to the Championship with Ipswich for 7 seasons before coming back to Colchester this summer.  With 10 league goals, Sears is the U’s current top scorer this campaign. 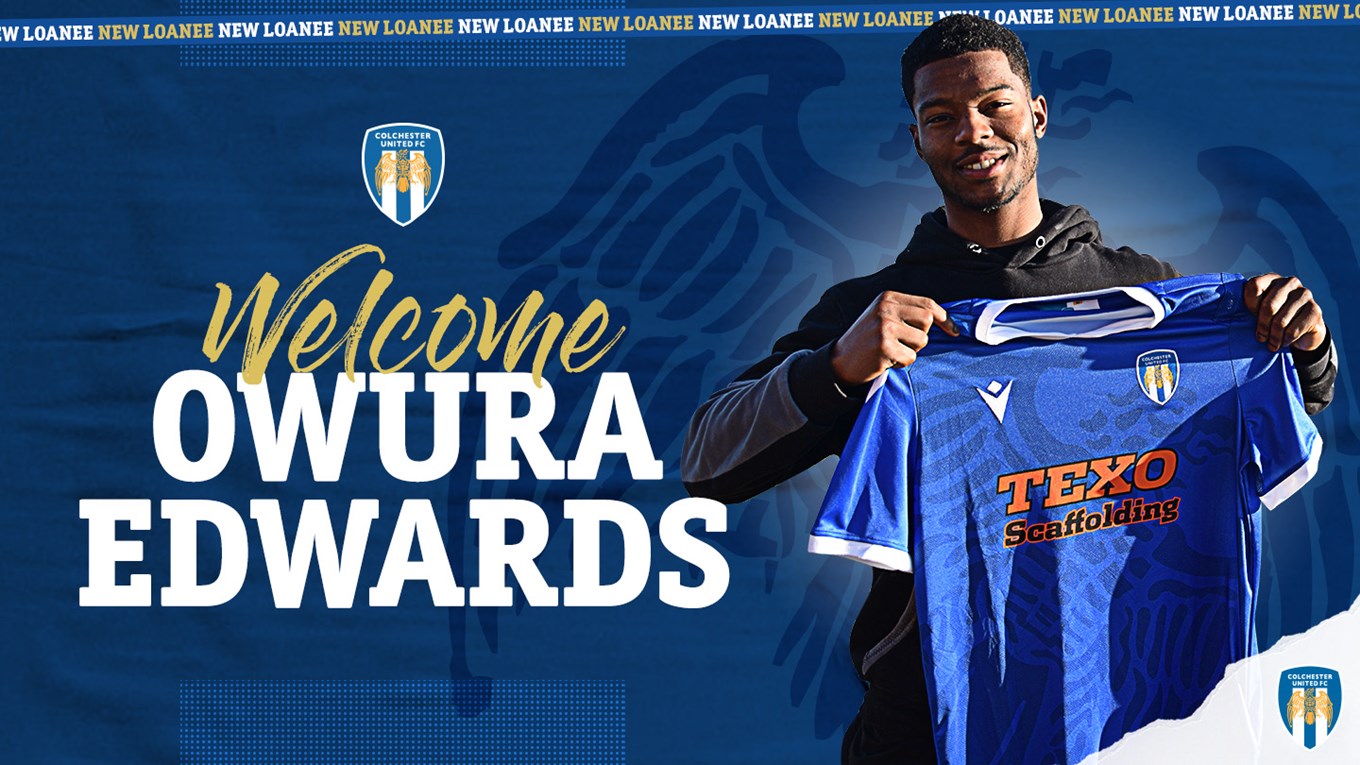 Owura Edwards may be turning into a shrewd January loan signing for Colchester.  The Bristol City winger has made an impact and was named in the EFL’s team of the week recently (together with Noah Chilvers).  Owura’s brother is our own Opi Edwards.

Noah Chilvers (number 14) – the Essex man who was the U’s Player of the Year last season, has 6 goals this season as an attacking midfielder.

Chilvers is a 20 year-old creative attacking midfielder with an eye for defence-splitting passes and the ability to score spectacular goals.  On the back of his breakthrough season, 2020/21, he scored 2 goals and made 44 first-team league appearances, Chilvers was named both Colchester’s Player of the Year and Young Player of the Year as well as receiving the Goal of the Season award.  He has 6 goals this season.  Born down the road in Chelmsford, Chilvers has been at Colchester since 2018.

It was a Chilvers goal after 69 seconds that ended Rovers unbeaten start to the 2020/21 season at the JobServe Community Stadium in October 2020.

Chilvers Edwards and Sears are certainly 3 Colchester players to watch.

Colchester secured the loan services of winger Sylvester Jasper (number 17) over the summer.  19 year old Jasper is a part of Fulham’s youth set-up and has been described as one of Fulham’s prodigies.

Jasper scored his first goal for the U’s in the 88th minute of their match at home to Harrogate.  The goal secured a 1-0 win and Colchester’s first home win of the season.  He followed this up with his 2nd goal of the season when Colchester beat Exeter at home in November, but he hasn’t scored since.

Defensive stalwart Tom Eastman (number 18) has been at Colchester for a decade.

Steve Ball lasted 7 months as Colchester manager. until his dismissal in Feb 2021.

Hayden Mullins was the man at the helm of Colchester from March 2021 until his dismissal in Jan 2022.

Wayne Brown became interim coach for just over a month after Steve Ball’s dismissal.  He has taken over as interim manager again following Hayden Mullins’ departure.  Brown is manager of manager of Isthmian League North Division side Maldon & Tiptree and is acting as Colchester’s interim manager in addition to his job at Maldon.

Colchester started life as Colchester Town.  In 1937 it was felt the club should turn professional but this was resisted by some.  As a consequence, a breakaway club was formed and Colchester United was born.  The new club progressed well and were finally elected to the football league in 1950.

Since then, the club have had a brief drop into the 5th tier in the early 1990’s and a brief rise into the Championship between 2006 and 2008.  In 2006 they finished second in the 3rd tier (just behind their Essex rivals Southend Utd) to gain promotion to the Championship.  They played just two seasons in the Championship before being relegated back to the 3rd tier.  Another relegation in 2016 dropped them back to League 2 – some 18 seasons after they last played in the 4th tier.

Colchester are one of 2 professional clubs in Essex so it isn’t surprising that Southend United are their main rivals.  Wycombe Wanderers and Ipswich Town are other rivalries for U’s fans.

The club originally adopted the Colchester coat of arms as their club crest.  But there was a dispute with the local authority in the 1930’s about the use of this logo and this forced a rebranding.  Since then, the crest has featured an eagle.  The U’s are sometimes also known as The Eagles and their mascot is called Eddie!

Eddie the Eagle is Colchester’s mascot.

Colchester play at the 10,000 capacity Colchester Jobserve Community Stadium.  This has been their home since 2008.

Colchester was a garrison town in Roman times and remains one to this day with the Colchester Garrison currently home to the 16th Air Assault Brigade.

Perhaps the most famous landmark in Colchester today is ‘Jumbo’. Jumbo is a water tower whose proper name is the Balkerne Gate water tower.  It was nicknamed (after a London Zoo elephant) as a term of derision in 1882 by Reverend John Irvine who was annoyed that the tower dwarfed his nearby rectory at St Mary at the Walls.  Jumbo became superfluous to requirements in 1986 and was sold by Anglian Water. Colchester is still trying to work out what to do with it now!

Colchester is reputed to be the birthplace of three of the best known English nursery rhymes – Old King Cole, Humpty Dumpty & Twinkle, Twinkle Little Star, although all three of these claims are disputed. Humpty Dumpty may have been a Civil War cannon that sat on top of a church tower in Colchester or it may have been a (rather overweight) Royalist sniper who sat on a wall taking pot-shots at Parliamentarians.  Who knows!?

Old Colcestrians include personalitites as disparate as Daniel Defoe and Mary Whitehouse.  In 1947 Margaret Roberts (later to become Thatcher) moved to Colchester to work as a research chemist for BX Plastics.  In 1948 she applied for a job at ICI, but was rejected after the personnel department assessed her as “headstrong, obstinate and dangerously self-opinionated”.